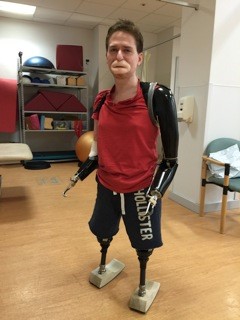 Pilgrim Bandits Charity is to join forces with The Alex Lewis Trust to bring the charities supporters together to smash the world tandem skydiving record. Almost 350 tandem skydivers are needed to smash the Guinness World Record set by Pilgrim Bandits Charity in 2013.
July 11th 2015, Saturday, APA Netheravon, Wiltshire will see hundreds of people take to the skies in a 24 hour bid to secure the prestigious Guinness World Record title once again. This time, the charity which supports injured men and women from the armed forces and emergency services has invited supporters from The Alex Lewis Trust to join the record attempt and raise money for Alex at the same time.
www.alex-lewis.co.uk In 2013 Alex Lewis, from Stockbridge Nr Andover, collapsed and was rushed to Winchester ICU. His only symptom leading up to this was a common cold. Within a few hours his vital organs were being supported mechanically, his blood forced around his body with nora-adrenalin and his chances of survival; “less than 5%.” Alex, 35 who has a partner and a 4 year old son, had contracted Strep A – usually nothing more than a sore throat. But, for Alex it took a menacing turn into Strep A Toxic Shock Syndrome, a very rare and devastating infection. After 7 days in ICU Alex beat the odds to survive but appallingly Alex lost each of his limbs along with a large section of his face to Necrotizing Fasciitis, a rampant bacterial infection

that requires urgent amputation to stop it spreading. In spite of all this, over the last two years Alex has made incredible progress and today is campaigning for improved support and equipment for amputees. He is able to walk again with the aid of specialist equipment, much of which is not available to him through the NHS. Over the course of his lifetime Alex will need over £1m for proper prosthetics and equipment which he will be required to fund himself.
www.pilgrimbandit.org Pilgrim Bandits Charity is the Hampshire based charity that funds extreme expeditions and pioneering medical treatments for injured members of all the armed and emergency

services. The injured patrons then visit schools, care homes, young offender’s institutes and businesses to share their inspirational experiences. Most recently the charity has been funding ground-breaking hyperbaric oxygen treatment and campaigning for greater availability to all those who need it. In September 2015 five injured servicemen will be kayaking over 430 miles up the Yukon River in Canadian Alaska as part of this year’s grand challenge.
Injured soldiers and veterans will be jumping on the day and it is hoped that with the protection of a special face protection helmet, Alex will be jumping also.
Tandem Skydive Specifics:
Max. Weight 16 stone
Min. Age 16 years
Price. £200 + £100 min. sponsorship to Pilgrim Bandits/Alex Lewis Trust
Register at www.pilgrimbandits.org