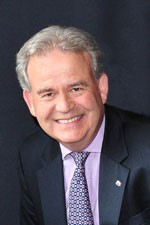 Julian Lewis is the Chairman of the House of Commons Defence Select Committee. He was elected to this post by his fellow MPs in June 2015, shortly after being elected as the Conservative MP for New Forest East, in Hampshire, for the fifth time since 1997. In September 2010, the Prime Minister appointed him to the Intelligence and Security Committee for five years and, in October 2014, he was additionally elected as a member of the Defence Select Committee. From November 2002 until May 2010, he was the Shadow Defence Minister for the Royal Navy, the nuclear deterrent and strategic issues. He held this post continuously, except for a period as Shadow Minister for the Cabinet Office between September 2004 and the May 2005 General Election.  Julian was appointed to the Privy Council in March 2015.

“I am delighted to become Patron for the Pilgrim Bandits.”  Explains Julian “I have watched with interest how the charity has developed over the recent years; championing new ideas for our injured working with underprivileged and deprived communities around the world, alongside its extreme challenges.  The charity’s No Sympathy ethos instils confidence and self-belief in men and women with the most appalling injuries and encourages them to share experiences with others.”