PFL Motorsport in the points in British GT at Brands Hatch 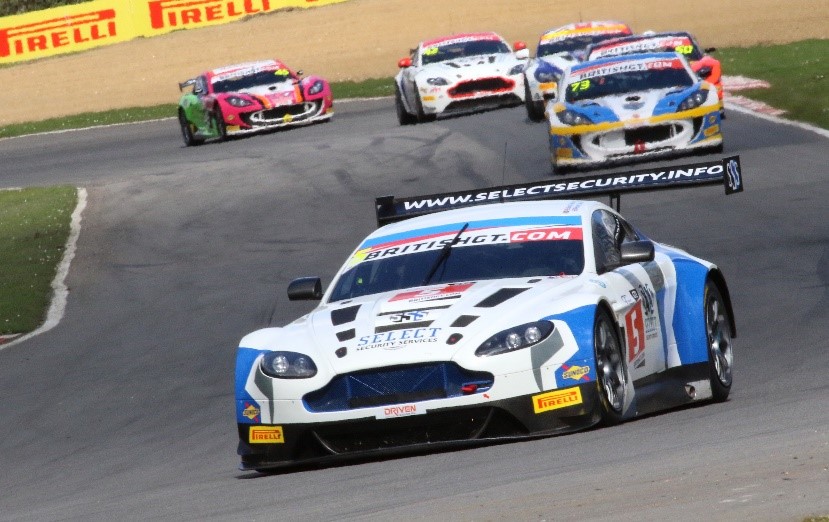 Peter Littler, Halton, Cheshire, decided to pit himself against the top GT drivers in the UK by entering the prestigious British GT Championship.  With a car secured from Aston Martin Racing the decision was whether to join an established team or form his own from scratch.  PFL Motorsport was formed in January 2016 giving Pete just a 4-month window to establish a competitive endurance racing team from scratch and in time for the looming start of the 2016 season.

The astonishing debut of the new PFL Motorsport team at the British GT opener at Brands Hatch last weekend saw the Aston Martin GT3 with Peter and Jody Fannin at the wheel charge to a points-scoring finish in an incident packed 2-hour race.

Remarkably Peter, who is classed as 40% disabled had to cope with a 1-hour stint in the Select Security Services sponsored 600HP Vantage and his first ever competitive pit stop and driver change – a gruelling challenge for an amputee with false hips and a plethora of bolts and plates holding his pelvis and spine in place.Roblox HackBigo Live Beans HackYUGIOH DUEL LINKS HACKPokemon Duel HackRoblox HackPixel Gun 3d HackGrowtopia HackClash Royale Hackmy cafe recipes stories hackMobile Legends HackMobile Strike Hack

Peter was up to 11th (in a field of 30) when he pitted for fuel and tyres with the race under caution flags after another Aston had rolled heavily at the high speed circuit.  Taking over at the stop was Aston Martin Racing Academy Driver Jody Fannin who set off in pursuit of the cars in front to snatch an incredible 8th place and 6 Championships points on their debut.

PFL Motorsport Team Manager, Paul Risbridger said, “It has been an amazing few short months for everyone but the commitment from Peter, Jody and all involved in ensuring team PFL was ready and competitive has been tremendous.  After just 3 days testing we have arrived at Brands as the new guys, but it just shows what can be achieved. The team has been starting early and staying late to practice the refuelling and wheel changes and on the day it has all come together and this gives us a great base to push forward this year. “

The next outing for the team is at Rockingham on the 30th April – 1st May.