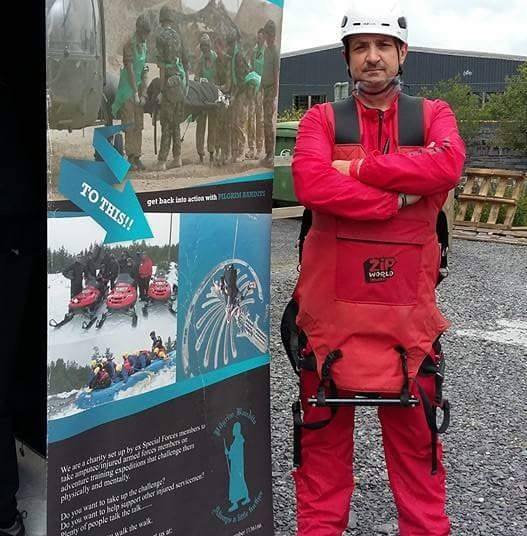 Saturday 2nd July, Pilgrim Bandits Charity has attempted to break another world record.  Over 70 people took part in a daring challenge to beat the existing record of 36.7 miles on a zip wire in 24 hours, organised by the charity’s Western region.

Among the 70 people taking part were injured servicemen and generous supporters of the charity including James & Ciaran Taylor-Hodge and Cameron Mathews (pictured top).  The daring trio completed the Velocity Zip Wire in Bethesda, North Wales which is the longest Zip line in Europe and the fastest in the world, reaching speeds of up to 100MPH over the 1mile line.  The team raised the new world record to 70 miles, nearly double the existing record.  The world record will be decided/confirmed by Guinness World Records in the coming weeks.

The event was organised by James Taylor-Hodge, the Shropshire and Western Region representative for Pilgrim Bandits Charity and saw people from all corners of the United Kingdom travel to the event (bottom).

Pilgrim Bandits is a military charity which challenges injured and amputee veterans and emergency service personnel to exceed their own expectations and in so doing grow in confidence.    Expeditions completed by the charity include crossing the Hardanger Plateau in Norway and kayaking 500 miles of the Yukon river in Canada.