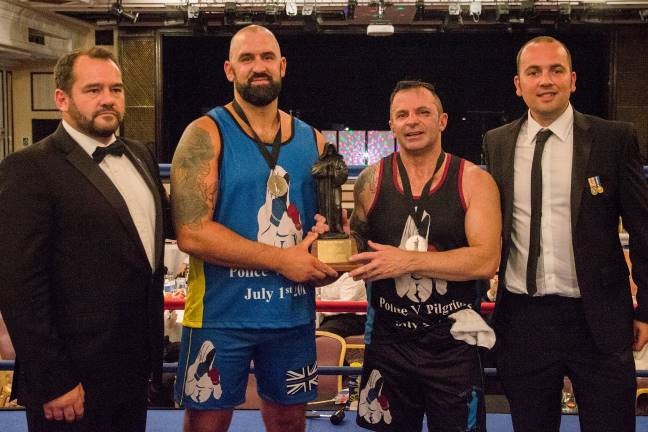 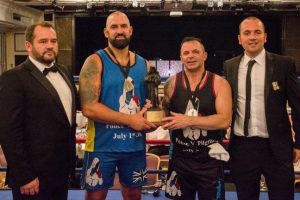 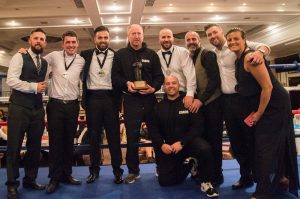 The first Pilgrim’s V Police boxing match for the new Blades Trophy, a black-tie event took place on Saturday, July 1st, 2017 at the National Motorcycle Museum in Solihull. Novice Police boxers came together from Thames Valley and Greater Manchester with the Pilgrim’s team gathered from all over the UK. Both teams put on a fantastic show of hard-hitting no-quarter boxing for the 200 guests attending. This first event ended with a respectable draw and it is hoped it will become an annual fundraiser for the Pilgrim Bandits Charity.
Pictured top: Sponsors from Vet’s Next Step Matt Hillyer (left) and Adam Elcock (right) from Elcock Associates Architects with team Captains James Whelan (Police) and Kevin Harris (Pilgrims).

Pictured bottom: Police Team. Captain PC James Whelan said “We have Police here from two of the most hardworking police forces in the country. Never has the partnership between the Police and the Armed Forces been more in evidence than during the recent terrorist incidents. Tonight has been a wonderful demonstration of a long collaboration between the two organisations and I’d like to thank everyone who took part and supported the evening for their hard work and generosity. With both teams sharing the Blades Trophy, the overall winners are our injured men and women – as it should be. I am looking forward to the match next year.”
www.pilgrimbandits.org